On The Edge Stories and musings from a professional stunt man

Bunraku is Neato Awesomesauce!!! (except that it’s also terrible) 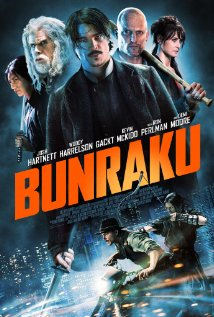 Here at On the Edge I’ll be offering my (at minimum) weekly perspective on all things awesome, specifically as the word pertains to the entertainment industry in general and the world of stunts and violence in particular. Some days I may make note of a pattern I see developing in recent action movies, such as my longer, list based articles about shitty fight scenes (format stolen mercilessly from Cracked), other weeks I may share an anecdote from my varied and interesting life as a stunt man and choreographer of all things “punch”, while other weeks, such as this one, I may take up an inordinate amount of my seemingly valuable time to go off on a rant about an old, long forgotten, and ultimately meaningless action movie.

So, without further ado, Bunraku.

“Bunraku” was walking on a knife’s edge between tribute and facsimile until it lost its balance, fell, and landed with a bone crunching thud in the realm of “unintentional parody”. Created in the style of everything done by anyone ever, the film draws influence from Sin City, Kill Bill, Dick Tracy, 300, comics, video games, graphic novels, westerns, samurai epics, Japanese puppetry, and your mom, to name a few. The resulting hodgepodge comes off as Dr. Frankenstein’s fever dream after he passed out from doing all the drugs.

I can see the music…

You know how in The Human Centipede three people are stitched together mouth to asshole to form a gruesome, monstrous mimicry of all that god intended? This movie is like someone sewed together Clint Eastwood, Frank Miller, and Akira Kurasowa, fed the front guy a diet of nothing but skittles and PCP, then collected what came out the back, tossed it up onto a movie screen and shouted “tribute!!!” 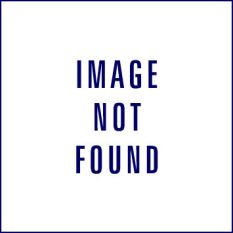 You people are lucky I suck at Photoshop…

However, some of it actually works. Even the harshest of critics begrudgingly mention the cool, otherworldly visuals and unique storytelling that it brings. Old west cantinas are inexplicably located next to quiet Japanese garden pagodas where duels for death and honor take place to a background of brilliant, moody, evocative lighting. 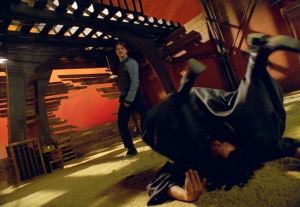 What else does he use this room for, exactly?

The cowboy character engages in a ~2 minute action sequence where he moves across a multiple level, Donkey Kong like set engaging a score of corrupt cops in a single extended take. That same character is later assaulted by everything from a posse of evil circus performers (culminating in a fistfight on a bouncy trapeze safety net), to a cadre of samurai assassins, to a cowboy doppelganger, to Ron Pearlman with a fucking axe.

There are no fewer than 15 fight sequences in this film, all creative, different, and evocatively constructed. They’re also very pretty, the stunt work is strong, and they even do an excellent job of characterizing the combatants physically (the cowboy fights like a cowboy, ditto samurai, etc).

However, at the same time, there is not a single sin that I preach against when I teach Stage and Screen Combat 101 that you can’t find somewhere in this movie. Often the timing on a reactions is off, or the aim on a technique is off, or it’s shot from a shitty angle, or the sound is wonky, or the fighters string moves together that make no sense, or you catch people standing around waiting to get punched, or the choreography is just fuck-all terrible. You’d need a god damn calculator to count the number of times someone does the always stupid “I swing my arm fast and that makes you flip dramatically to the ground” bullshit.

I am so fucking tired of this.

The reason the fights in Bunraku fail is, really, because of the same problem that was at the core of the movie as a whole: They tried to do too much, and ended up not doing enough. The fights in “Scott Pilgrim vs. the World” were great largely because someone decided from day one that: “Ok, we are making a video game as much as we are a movie, so people who fight need to move like they are in a video game”. There was a clearly constructed “world” for the fights to live and operate in. Similarly, the fights in “300” were clearly created in the world of the graphic novel, so they maintained a sort of narrative consistency throughout. 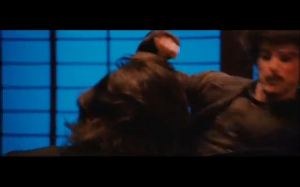 A prime example of this in a larger sense can be seen just in the length of the film. What is Demi Moore doing in there?!? She is utterly inconsequential. Why are there 10 killers when only 2 matter to the plot, and only 4 get any notable screen time at all (we couldn’t have told you who the other 6 were without the comic book style captions). Why do we care about the stupid peasant uprising shoehorned in at the end? How many of these fight scenes actually matter to the plot?!?!?!?!
Bunraku, more than anything else, needed to stop trying to do everything and just do something. It could have been so good. It is so fucking close to being good, but it’s just not. As is, when I finish watching this movie I feel like George Clooney at the end of “The Descendants”.

This entry was posted on July 25, 2012 by johnevenden. It was filed under Uncategorized .